Next week (Wed. Apr 21st) we are at Castaic!
​Foothill League Top Ten on Athletic.net

Alumni Update:  Many of you probably remember Dennis Lynch.  He was  a favorite
teacher of many of our alumni who  taught Mod Civ, History, and coached our academic
decathlon team for many years.  He passed away on Mar. 23, 2021, at Henry Mayo
hospital due to heart conditions.  His cardiologist was one of his former Canyon students.

Christian Valles '19, had another PR in the Pole Vault!  He vaulted 16-9.25 Saturday, Apr 3rd
​at the Cal Poly Quad Meet!  He took 1st place and is currently the conference leader! 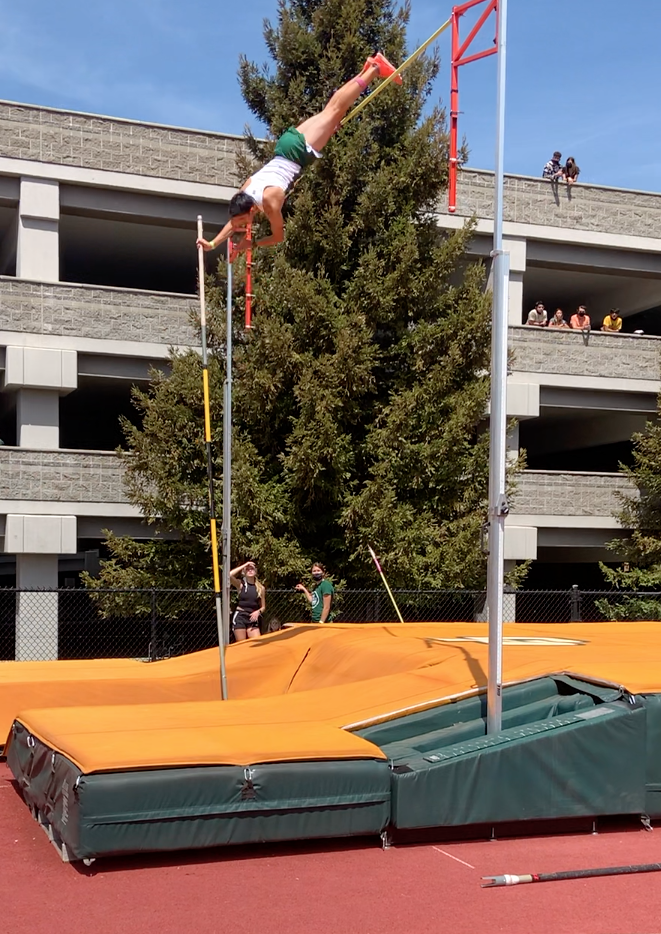 Christian Valles PR 16-9.25
Mar. 27, 2021  Canyon varsity boys and girls defeat Valencia! RESULTS
Canyon track athlete Austin Hernandez set the bar high at the first track dual meet of the season, notching three top ten
performances in the state of California. Canyon varsity boys defeated Valencia 71-61 in the first league
dual meet of the season.
​Austin Hernandez led all scorers with 20 points, and won the high jump with a jump of 6’6”, (New Meet record - old mark 6-5 by
Kevin Enge in 2011) 1st in the state leading jump so far.  He also won the 110 high hurdles in a time of 14.73, the third best time
in California, (New Meet record - old mark 14.9 by Trevor Habberstad in 2006) and won the 200 in 22.36, the sixth fastest California
time.  Distance runners Jayson Velarde, Jacob Brown, Sam Regez, and Kyle Stevens swept the distance events for Canyon.
Valencia dominated the sprints, winning both relays and sweeping the 100 and the 400.  Trey Suffredini won the 400 and was
second in the 200.  Cai Morgan won the 100.  But Canyon was able to edge Valencia with the help of some key role players.
Travis Dyson won the shot put and was second in the discus.  Hamilton Davis won the pole vault and was third in the triple
jump.  And freshman Gavin Millhench scored key points in his first track meet, stepping up to earn second place in the triple
jump and third place in both the long jump and the shot put.

Canyon varsity girls defeated Valencia 80-45 behind the strength of some talented young runners.  Freshman
Savannah Holcombe won the 100 high hurdles, 300 hurdles, and the high jump.  This was the first meet in which she had competed
in any of those events. Freshman Cynthia Herrera won the 1600 and the 3200, and was second in the 800.  Freshman, Cayden Panariello
won the 400 and the long jump. Ebony Lubin won the shot put and discus.  Valencia speedster Shania Joachim won the 100 and the 200
was part the winning 4x400 relay team.
Sprinters/Hurdlers/Jumpers: Here is tentative next week schedule due to other games played at Canyon..
Monday at Canyon at 3:00pm
Tuesday at Longshore Park at 3:00pm
Wednesday at Valencia High School MEET #1
Thursday at Canyon at 1:30pm
Friday at TBD (will be either at Canyon or Longshore Park) at 1:30
Saturday at Canyon 10:00am for Austin and any other Hurdlers or High Jumpers that can make it.

If the public health order changes, and our district allows it, we will see if we can attend invitationals outside our league.

Practices:  Now that all sports are playing at the same time (football, soccer, and track specifically all use the track and field), we will not be able to use the track during soccer or football games.  This particularly impacts our practices on Tuesday and Friday afternoons.  The coaches just learned of this (on March 11, once the schedule for facilities was shared with us), and we are working to determine our practice schedule.  This practice schedule may change from week to week because of all of the craziness of every sport competing at the same time, so athletes need to pay attention to updates from coaches.

​Alumni Update!  Gabby Sanchez (UCSB) and Christian Valles (Cal Poly SLO) opened their
season at the Fresno Pacific Spring Break Invitational Saturday, March 13, 2021.  Gabby won the Discus
Throw 153-1, and took 2nd in the Shot Put 44-10, and Hammer Throw 159-7.  Christian had a double PR winning
the Pole Vault at 16-4 3/4!
Senior, Austin Hernandez, has committed to attend the United States Military Academy, WEST POINT,
next year and become a Black Knight!  Congratulations, we are proud of you!

Austin Hernandez set a new school record 8.32 placing 2nd in the 60 m High Hurdles VIDEO
​in an indoor meet in Chicago. (Austin was in Lane 3)

Our schedule now is so tentative, that it is not worth even guessing what it will be.  Hopefully, the school
will return to "normal" and we will have a Spring Semester and athletic season.  We will probably only go
to a few invitationals, and most likely only take our top athletes, as the school will not be able to pay for
busses.  Also, note that our "Post Season" will begin on June 5th with CIF prelims.  School will be out June 3rd!
Our own Alysia (Johnson) Montaño made the cover of this month's
​Runner's World VIDEO